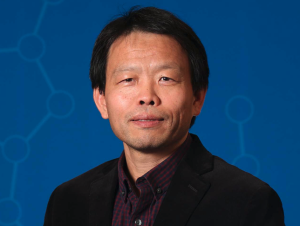 The basal ganglia and amygdala circuits have important roles in learning and expression of behavioral responses driven by either appetitive or aversive stimuli. How exactly distinct circuits contribute to the generation of such divergent behavioral responses remains unclear. Our recent studies in mice indicate that reward and punishment based learning induces distinct plastic changes in distributed circuits in the basal ganglia and the amygdala, and reveal how these learning-induced changes can be used to guide flexible behaviors. Here I will report our recent findings regarding the cellular and circuit mechanisms underlying some of the behavioral roles of these distinct circuits.

Dr. Bo Li has been trained in molecular neuroscience and synaptic physiology, with extensive experiences in systems neuroscience. The focus of research in his laboratory has been to understand the link between neural circuits and motivated behaviors. His lab is particularly interested in studying the synaptic and circuit mechanisms underlying aspects of motivated behaviors, such as attention, motivation, and learning and memory; as well as synaptic and circuit dysfunctions that may underlie the pathophysiology of mental disorders, including anxiety disorders, depression and autism. Dr. Li’s lab integrates in vitro and in vivo electrophysiology, imaging, molecular, genetic, optogenetic and chemogenetic methodologies to probe and manipulate the function of specific neural circuits in the rodent brain, and to determine their roles in adaptive or maladaptive responses in various behavioral paradigms. The lab is currently undertaking three major lines of research to investigate (1) the roles of basal ganglia circuits in reward-seeking and punishment-avoidance behaviors, and behaviors related to depression and autism; (2) the roles of amygdala circuits in motivated behaviors, and behaviors related to anxiety disorders; and (3) the interactions between the amygdala and the basal ganglia circuits in motivated behaviors.